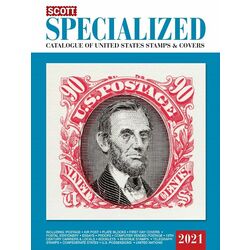 The U.S. Specialized catalog features numerous value changes. Once again, as for the last couple of years, action in the marketplace is in very high-grade stamps and rarities. Some rarities were sold during the past year, and some new values have resulted, such as in Officials and Newspaper stamps. As one might expect, the bulk of the value changes, more than 2,000, are concentrated in the Postage section. Values for very fine stamps, in general, are steady or, in a few cases, somewhat softer. Hundreds of value changes are found “Scott Stamp Values U.S. Specialized by Grade.” This special section of the catalog is sometimes referred to as the “yellow pages” because the pages have a yellow border to make them easy to locate.


The 2020 edition marks the 98th edition of the Scott U.S. Specialized Catalogue.